I build theory-driven computational models of neural circuits and systems "in the loop" with animal behavior and feedback from environmental interaction. Broadly, I seek out the inductive theoretical valleys often shadowed by rising mountains of data, which collectively threaten to detract the capacity of neuroscience to interpret and understand the brain's complexities. My work has centered on spatial cognition and episodic memory and their deeply entangled duality within the hippocampus. From that foundation, my focus has been evolving toward more general theories of timing (e.g., oscillatory phase coding, flexible interareal communication) and dynamics (e.g., transitory attractors, heteroclinic trajectories) in the embodied interactions that underpin the cognitive computations of intelligence.

Basic theoretical research like this is needed, now more than ever, to substantiate the views afforded by the neural data summits and to translate the resulting insights into applicable human neuropsychiatric knowledge of healthy vs. disordered or degenerative brain states. The overarching project is to build models, informatively data-constrained but theory-driven, that explain (or delineate the experiments needed to explain) how temporal and dynamical coordination in brain-body-environment systems enable intelligent agents to act on, and thus perceive, the world. 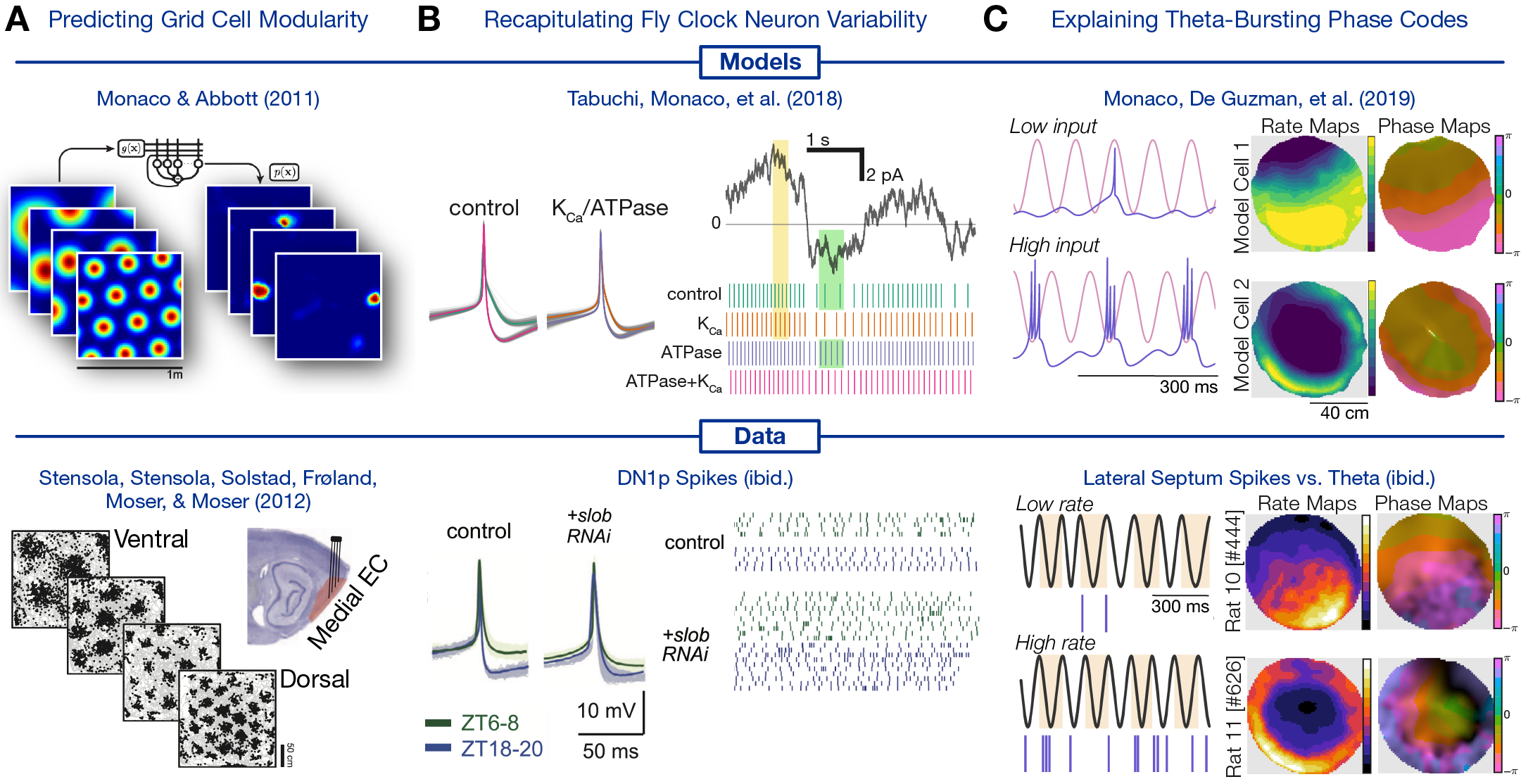 Example modeling results with relevant data for comparison. A, My grid-to-place model (Monaco & Abbott, 2011) predicted four scale-based modules in the medial entorhinal cortex (MEC), as corroborated by the Moser lab (NTNU/Norway). B, My biophysical neuron model of sleep vs. wake firing in DN1p clock neurons of Drosophila (Tabuchi, Monaco, et al., 2018) explained spike waveforms (left) and diurnal spike regularity (right). C, My theta-bursting models of what I termed phaser cells (Monaco et al., 2019) demonstrated how a subpopulation of neurons in the lateral septum of rats might produce spatial phase codes that can drive downstream networks to learn arbitrary spatial-phase patterns for stabilizing path integration and other navigational processes.